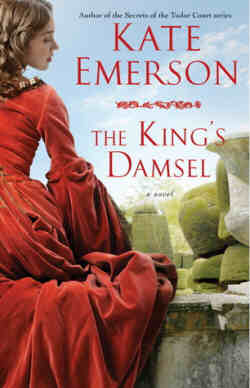 The King’s Damsel is the story of Thomasine Lodge, maid of honor to Princess Mary Tudor, sent to the court of Mary’s father, Henry VIII, to spy on Henry’s new wife, the beautiful and deadly Anne Boleyn.

Handmaid. Spy. Mistress. Anxious to secure his own success at the glittering court of Henry VIII, heiress Tamsin Lodge’s ambitious guardian obtains her a position as maid of honor to young Princess Mary Tudor. Tamsin soon comes to love the neglected child, but in the Tudor court, not even a princess is secure. Mary’s father is besotted with the lovely Anne Boleyn, and the girl’s future has grown perilous. Plotting to be Mary’s eyes and ears, Tamsin joins Anne’s service, but the handsome silk worker who is her co-conspirator may be her undoing. While marriage with a merchant is unthinkable, she cannot resist Rafe Pinckney’s embraces. When Tamsin also attracts the lusty Henry, she must choose between loyalty and desire. . . . With Anne’s jealousy growing dangerous, can Tamsin survive the schemes and seductions that surround her?

“Sparked by an actual letter written by a Spanish ambassador in 1534, Emerson creates a believable scenario rich in accurate detail where her fictional Thomasine strolls comfortably next to real-life figures.” — Publishers Weekly

An expert in all things Tudor, Kate Emerson is the author of the Secrets of the Tudor Court series: The Pleasure Palace and Between Two Queens. She lives in Wilton, Maine.

Kate Emerson is the pseudonym of a well-known writer of historical mysteries and nonfiction. She is not trying to confuse readers, only distinguish between two very different types of writing. Kate Emerson’s historical novels are set in the Tudor era (England 1485-1603) and feature real but little known historical figures as the protagonists. Kate Emerson lives and writes in rural Western Maine, where she shares her home with her husband and three cats.

This is the first book I have read by Kate Emerson and from this series. It is a genre that I am attracted to naturally though, so I knew that unless it was totally awful, I would find something interesting in it.

And actually, when I read this book, it set me off on a historical romance journey on my summer reading and movie choices. I enjoyed the spin the author took on this story which alludes to the much discussed life of King Henry VIII. He certainly is one of the most colorful characters of that period.

I remember thinking how I liked the way off base tangent this story took even though it revolved around real characters and events. It shows some imagination and not just a re-hashing of the same oft told story.

I liked that the novel focused on Tamsin for the most part and the rest of the larger characters were relegated to the background. I enjoyed reading about her navigating the machinations of court life. It was very detailed and full of descriptive imagery that I could easily visualize each scene. The descriptiveness even pushed to borderline too much in the middle of the book. I think I skimmed a few chapters in the beginning and in the middle.

However, I just wish that the author had wrapped up the ending more. At the end, the  details and descriptiveness suddenly vanish. The last chapters after she leaves court seem hurried and I could almost imagine a bug’s bunny character popping up at the end going, “That’s All Folks!”

I really would have liked to have a couple more chapters at least to show where she goes after court. A little more detail about Rafe, their relationship and how they fared afterwards, whether happily or not, would have been nicer than the abrupt ending.

DISCLAIMER: I received a free copy of this book from Simon & Schuster. I did not receive additional compensation to review it and all opinions expressed in this post are mine only. Book description and author’s bio were taken from Amazon and the author’s website.

One thought on “Book Review: The Kings Damsel by Kate Emerson”