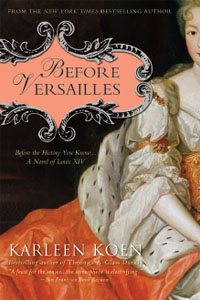 Before Versailles focuses on four intense months of King Louis XIV’s young life.  It’s the summer of 1661, and after the death of his prime minister, twenty-two-year-old Louis steps into governing France. He’s still a young man, and in a way quite inexperienced and shy, but also very determined, intelligent and headstrong.  He’s used to having anything and everything his heart desires—land, women—including his brother’s wife.

As the love affair between the two burns, it sets the kingdom on the road toward unmistakable scandal and conflict with the Vatican. He must face what he is willing to sacrifice for love. At the same time, there are other problems lurking outside the château of Fontainebleau: a boy in an iron mask has been seen in the woods, and the king’s finance minister, Nicolas Fouquet, has proven to be more powerful than Louis ever thought—a man who could make a great ally or become a dangerous foe.

Karleen Koen (www.karleenkoen.net) is the New York Times bestselling author of Through a Glass Darkly, Now Face to Face, and Dark Angels, an Indie Next List bestseller and a BookSense pick. She lives in Houston, Texas.

The whole story, while it involves numerous characters and features notables from history, actually revolves around one girl, Louise de la Baume le Blanc, who becomes a lady-in-waiting at the court. The novel starts out with Louise as a young girl who encounters a boy in an iron mask while taking a ride through the woods. That should be your first clue at how complex and convoluted this novel is going to get. She couldn’t get that boy out of her mind and as she searches for him and his true identity, facts come to light that neither illuminates nor clears the path but rather brings out more shadows to muddy the way.

I read this book on sunny afternoons during the summer with a tall glass of iced tea while I sat under the tree in the backyard. And once in a while, when the breeze blows I can almost imagine myself transported to Versaille as vividly described as it is in the book. The description of the characters and their setting is so colorful that I easily got lost in that world, immersed in the intrigues and machinations of court life. Just my kind of book for a summer escape!

DISCLOSURE: I received a copy of SourceBooks to review. No other compensation was received and opinions regarding this book are all mine.