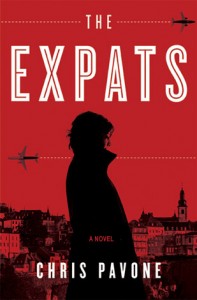 Kate Moore is a working mother, struggling to make ends meet, to raise children, to keep a spark in her marriage . . . and to maintain an increasingly unbearable life-defining secret. So when her husband is offered a lucrative job in Luxembourg, she jumps at the chance to leave behind her double-life, to start anew.

She begins to reinvent herself as an expat, finding her way in a language she doesn’t speak, doing the housewifely things she’s never before done—playdates and coffee mornings, daily cooking and never-ending laundry. Meanwhile, her husband works incessantly, at a job Kate has never understood, for a banking client she’s not allowed to know. He’s becoming distant and evasive; she’s getting lonely and bored.

Then another American couple arrives. Kate soon becomes suspicious that these people are not who they say they are, and she’s terrified that her own past is catching up to her. So Kate begins to dig, to peel back the layers of deception that surround her. She discovers fake offices and shell corporations and a hidden gun, a mysterious farmhouse and numbered accounts with bewildering sums of money, and finally unravels the mind-boggling long-play con that threatens her family, her marriage, and her life.
Stylish and sophisticated, fiercely intelligent and expertly crafted, The Expats proves Chris Pavone to be a writer of tremendous talent.

Chris Pavone was born in 1968, grew up in New York City, and attended Midwood High School in Brooklyn and Cornell University, where he majored in government. He worked at a number of publishing houses over nearly two decades, most notably as an editor at Clarkson Potter, where he specialized in cookbooks.

He is the father of twin schoolboys named Sam and Alex, and an old cocker spaniel named Charlie Brown (he’s brown), and the husband of Madeline McIntosh. He lived in New York City his entire life, except for college and the year and a half that they lived in Luxembourg, where he started writing The Expats in the cafés of the cobblestony old town. He and his family now live in Greenwich Village and the North Fork of Long Island.

MY THOUGHTS
Sometimes, I need a book like this; one that doesn’t elicit strong emotions, does not tug at any strings or makes you say “AWWW” over and over again. We all need a passive read once in a while, don’t we? God knows I did after 4 books of Ice and Fire and a couple of John Greens!

This is supposed to be a suspense/thriller/mystery genre which is never my first choice anyway, but this book just misses being suspenseful, thrilling or mysterious. It’s still a good story though.

It’s just a bit predictable and after the first fourth of the book, I spent the rest of the time waiting for the protagonist to catch on already! For an ex-spy, CIA agent, she sure was a bit slow. I was kind of disappointed. I was expecting a kick ass mom CIA agent.

The premise still proved to be a good read though and the descriptions of the different locations, Luxembourg, Belgium and Paris made you feel as if you’re right there on the scene.

On GoodReads, I rated this book three stars because I really did like it and didn’t feel once that I could abandon the story.

DISCLOSURE:
I received this book from Random House although I don’t remember requesting to review it. They didn’t ask for me to review it, it just appeared on my doorstep. So this review is entirely on me.